Discover the oldest royal palace in use in Europe with an official guide. A monumental complex that summarizes the history of Seville and its main architectural styles: Gothic, Mudejar, Renaissance and Baroque.

Schedules chosen by you

Meeting point chosen by you

Discover the oldest royal palace in use in Europe and one of the most beautiful places in Seville: the Royal Alcazar. A fortified set of palaces with different architectural styles. The Gothic Palace of Alfonso X the Wise, the Mudéjar Palace of Peter I and the House of Trade. Finally, a walk through its wonderful gardens, with more than 7 hectares.

Customizable schedules. We must take into account the opening hours of the Royal Alcazar (9.30-17.00 hours).

Ticket prices to the Royal Alcázar 14.5€ adults, 7€ students from 14 to 30 years old and pensioners over 65 years old (original documents must be shown when accessing the monuments; only for citizens of the European Union), 1€ minors up to 13 years old, free for born or resident in Seville. The price includes the additional cost of 1€ per ticket associated with the electronic purchase. The general visit ticket includes a free visit to the Bellver Museum, Antiquarivm, the Triana Ceramic Museum, and the San Jorge Museum. It is essential to present the official documentation accrediting each type of ticket when accessing the monument. Alcázar Website https://realalcandosevilla.sacatuentrada.es/

How do you book?

The reservation module is accessed through the “Book now” button. After receiving the request I will confirm my availability.

Are tickets to the Royal Alcazar included in the price of the visit?

No. We will agree to book tickets on the Royal Alcazar official website on the preferred day and time for the guided tour.

Is it price per person?

No. It is a fixed price for the entire private group (up to 30 people).

Do you have availability?

I will confirm my availability after receiving the reservation request. If I am not available on that date, we are a large team of official guides so there will be no problem to find a colleague available.

The word Qasr means fortress or fortified house in Arabic. It is an ancient fortified Arab complex of the 10th century, built for the defense of the city. The Royal Alcazar have been used and expanded by Christian kings since the time of the conquest of Seville by Christianity in 1248. These wonderful palaces have hosted kings and governors of the Umayyad caliphate, the Almohad Empire, the kingdom of Castile and later Spain. Inside the complex we will find the Gothic Palace of Alfonso X el Sabio, the Mudéjar Palace of Peter I, the preserved rooms of the House of Trade and its wonderful gardens, which will surprise you with its beauty. This place, declared a World Heritage Site in 1987 by UNESCO, is considered a sumptuous synthesis of Mudéjar, Gothic and Renaissance architecture. Its courtyards, halls and gardens leave you breathless. We will know the story of Pedro I who ordered the construction of the Mudéjar Palace, the underground baths of his lover María de Padilla or the incredible Hall of Ambassadors. A wonderful place where the Game of Thrones series or movies like The Kingdom of Heaven has been filmed.

Do not miss the guided visit to the Alcázar of Seville and come discover the history of this fantastic place with an official guide. Places such as the Patio de las Doncellas, the Patio de las Muñecas, the Mercury Pond and the wonderful gardens of the Real Alcázar are waiting for you. 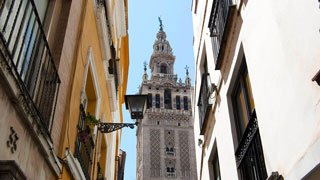 See details
Book now
1
Hello!
Can I help you?